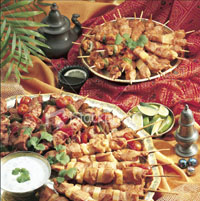 One of the most delicious and important non-Vegetarian dishes of Indian food, is Kabab. Wherever non Vegetarianism is prevalent, Kabab is sure in the Menu of many Indian's special occasions. Kabab is delectably liked by many of the foreign people, these days.

Kabab is certainly a food item that has to be tasted at one time or another in lifetime. Kebabs are skewered meats and vegetables cooked over a hot flame, either on a grill or under a broiler in the oven.

Kabab is spelled just as many ways as they can be cooked, from kebab, kabob, kebop, kibab, kebap or kabap. Kebabs are the ultimate cookout food and this collection you give you a variety of ways to make kebabs.

There are many varieties of kebab; the term has different meanings in different countries. Kebab means "grilled (or broiled) meat" in Persian and Arabic and several other related languages. The generic term kebab usually refers to diner kebab in Europe, and to shish kebab in the United States, though its meaning varies.

Kebabs usually consist of lamb and beef, though particular styles of kebab have chicken or fish. Pork is never used for kebabs especially by Muslims because of the religious prohibition on the meat, but is sometimes used by non-Muslim sellers.

The challenge to make a delicious Kabab is to cook it in ways that enhance the goodness of the meat while cutting down on oil and fat. Selecting the right cut, combining the meat with greens and vegetables, using the grill instead of the frying pan, can all help to make it a healthy and nourishing part of your meal.

The different types of Kabab Recipes featured in this section will give a great variety of Kebab dishes of the Asian region. Click on the given Melt-in-the-mouth kebabs ad try out to make your Menu, a special one!