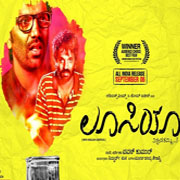 A young breed of talented actors is raking in the moolah at the box office in Sandalwood. With action-packed films that offer just what the fan clubs of Kannada heroes look forward to, these flicks are being produced only as commercial potboilers.

Setting in new benchmarks in Sandalwood, Lucia (2013) directed by Pawan Kumar is a psychological thriller and this movie was such a grand success that it was remade in other regional languages too.

Another milestone film is Yash-Radhika Pandit starrer Mr and Mrs Ramachari (2014) directed by Santhosh Anandram. The film's story is so powerful and evocative that it impressed Telugu icon Chiranjeevi's nephew Sai Dharam Tej who will be remaking it in that language.

The life of orphans and destitute children was vividly narrated in Mythri (2014) starring Puneeth Rajkumar and directed by Giriraj B.M. With a strong message for the society, Mythri shook the conscience of Kannadigas. It is said that Telugu superstar Nagarjuna has got the rights to remake this film soon in Tollywood.

It is a good sign that other movie industries are taking note of good films being made in Sandalwood and are eager to get rights to remake them in their languages.

While a number of big budget flicks are on the pipeline, star driven projects like Rana Vikrama (starring Puneeth Rajkumar), Vajrakaya (Shivarajkumar), Masterpiece (Yash) and Ranna (Sudeep) are expected to do roaring business at the box office.

Starring Puneeth Rajkumar, this move is directed by Pawan Wadayer. This mass action film also has actors Adah Sharma and Anjali in the lead roles. The movie is being shot on a big budget scale with the aim to provide wholesome entertainment to families.

This is Shivarajkumar's bold attempt to revive his fortunes in Sandalwood after the average grosser in Aryan (2014). Aimed to woo the family audience, the director Harsha is keen to release it soon without delay as social media sites have been agog with the Shivarajkumar's upcoming film.

Rocking star Yash has set a new trend in Kannada films with his dashing, punk look and is currently working at a frenetic pace for Masterpiece being produced on a big budget scale. 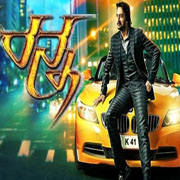 Kiccha Sudeep will be the protagonist in the upcoming Ranna, the remake of Telugu superhit �Attarintiki Daredi that is one of the highest grosser at the Tollywood box office.

Actor-director Upendra, known popularly as real star among his fans, has built up a reputation for making thrillers in Sandalwood. Following Shivam, this upcoming film Uppi 2 is considered as a sequel to Upendra (1999) 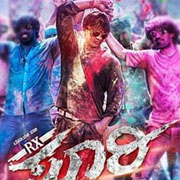 Duniya Vijay is starring in this film packaged as a romantic entertainer. It is said he had sung a song for this movie. This actor showed much promise in Kari Chirathe earning goodwill among moviegoers.

Known for his lover boy image, Ganesh is now playing a negative role of a gangster in this film. The pre-release publicity and posters have enthused his fans who look forward to a visual treat.

Challenging star Darshan dons the role of a police officer in this movie a compared to a lover boy image in his earlier film. His ardent fans are eager to see him as tough cop in the big screen.

Ugramm is the comeback film for Srimurali who was portrayed in an extremely violent manner in that film. The entire Sandalwood took note of his acting skills and now will be keenly watching his performance in Rathaavara. 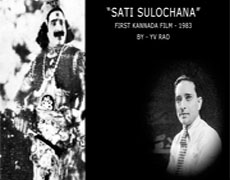 The first Kannada talkie Sati Sulochana (1934) was followed soon by Bhakta Dhruva. And both the films were instant hits among the Kannadigas.

Gubbi �Veeranna, a towering patron of Kannada theatres, is credited with pioneering Sandalwood by producing, scripting and writing in a number of movies in 1930s and 40s.

It was Veeranna who introduced thespian Rajkumar as hero in one of his movies and the young actor never looked back. During 1940s-50s, historical and mythology-based movies were common in Kannada.

Bedara Kannappa (1954) was the first film to be screened in theatres for a year and it received a letter of appreciation from the Central government for this feat.

In the late 60s and 70s the Kumar trios - Rajkumar, Kalyankumar and Udaykumar - essayed myriad roles which captivated the public for its sheer versatility and nuanced acting.

The late 60's saw the emergence of famous Kumar trios Rajakumar, Kalyankumar, Udaykumar who ruled the industry from 60's to 70's with majority of the films during this decade were either mythological or historical in nature.

If there is one actor who had symbolised Kannada pride and Kannada films to the core, then it is Rajkumar who with ease had performed thousands of roles spanning a wide genre of acting from historical, mythological and social to contemporary themes and comic situations. 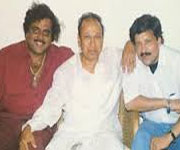 In this period, Dr Vishnuvardhan and Ambareesh reached super stardom with films that won the hearts and minds of movie goers.� Both the actors were introduced by director Puttana Kanagal in his cult film Naagarahaavu.

Parallel cinema took roots in Sandalwood with realistic themes and screenplay that held a mirror to the society. From the mid-70s to 80s, Vishnuvardhan achieved new heights by acting in 220 films in five languages.

Family oriented subjects were the toast of Kannada films as heroes like V. Ravichandran, Shivarajkumar and Ramesh Aravind cashed in on this sentimentality among the public to deliver consecutive hit movies of that time.

In 1995 Shivarajkumar in his role as Bangalore gangster in Om directed by Upendra created a new wave in Sandalwood as for the first time crime and underworld issues were brought out to the public glare through cinematic work.

New Millennium of Kannada Cinema (from 2000 to present)

A profusion of highly talented actors - Puneeth Rajkumar, Darshan, Yash, Kiccha Sudeep and Ganesh, among others - had changed the very dynamics of Kannada film industry.

Maintaining a box office success rate of almost 100 per cent till now, Puneeth, the fifth child of thespian Rajkumar, has achieved many feats within a short time. He excelled in dance, stunts, histrionics and moreover, having got acting gene in his blood, Puneeth films were much enjoyed and appreciated by the Kannadigas. He is followed by Darsh, Yash and Sudeep in terms of top ranking in Sandalwood.

A seminal film Mungaru Male (2006) made in a shoestring budget of Rs 1.3 crore went to earn a record Rs 45 crore. Moreover, this was the first film in India to have run over a year in a multiplex. Other films like Jackie, Bhajarangi, Super and Sangolli Rayana were able to make record collections at the box office.

Lack of original content and taking the easy way out by remaking box office hits from other regional languages have come in the way of improving the quality of Kannada films.

What is alarming is that Kannada superstars are playing safe by just churning out hits in the domestic market rather than trying out opportunities in neighbouring states of Andhra Pradesh and Tamil Nadu. Surely, theatrical collections alone cannot be the sole determinant of the growth of a regional film industry.

While top heroes in Tamil and Telugu industries have made inroads in each other fiefdoms through dubbed films, this had led to healthy competition and also market expansion of their respective filmdom.

If the Kannada film producers are looking for more revenues then the only way forward is to release their dubbed films in neighbouring states to have a slice of pie from the huge money being generated by theatres and multiplexes in Andhra and Tamil Nadu.

But there is an irony here. The Karnataka film chamber and filmmakers are not allowing any dubbed movies in their market fearing loss of income from theatrical segment. Already in Bengaluru, the hot seat of Sandalwood, Hindi, Tamil and Telugu films attract more audience than Kannada films.

Hence, it is high time the Kannada producers come to terms with their limitations while competing with other language films in their own market and then make earnest efforts to release dubbed versions of their films in other South Indian market to increase their market share.

On the issue of sharp decline in the content and mode of presentation of Kannada films, producers need to exchange more with directors, writers and learn from Malayalam filmdom on how to draft a subject out of a well-known literary work to make it to the silver screen.

Due to declining revenues and box office flops, the number of Kannada films being produced in Karnataka has fallen drastically and there is a danger than other language films will cut into the traditional strongholds of Sandalwood.

According to trade sources, Karnataka government must offer incentives and subsidies to producers having a well-researched script but finding it difficult to make it into a feature film.

What is most surprising is that Kannada literary works have not been tapped by well-known producers even as top heroes turn a blind eye on the need to develop a script-based approach in developing story, screenplay and dialogue of a film.

Unless the filmmakers chart out a broad vision for Sandalwood by consulting all stakeholders, it is difficult to stop the downward spiral of Kannada films which is heading towards a bottomless abyss.