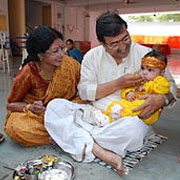 With an ancient literature and having contributed much to nation's progress, Bengal resonates with abundant diversity. Hence, Bengali families take much delight in giving their children the right name that reflects their desire and long-felt wishes.

A melting pot of many cultures drawn from all parts of the country, this region offers wide scope in selecting the right Bengali name for the newborn.

Naamkaran or christening of the baby is an important event in a Bengali family and they perform the ritual with sincerity.

As a distinct linguistic group with a hoary culture, Bengalis are popular for their unique surnames that reflect their family background and sub-clan groupings.
Moreover, Bengalis believe that a name must explain the character of a person and his upbringing and hence, the families give time and importance to name their newborn. 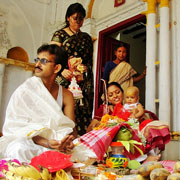 The local astrologer is consulted to fix the day and time for the Naamkaran ceremony. And the horoscope of the child is prepared on the occasion to be placed before the deity.

According to the Bengali tradition, Naamkaran is usually observed within a few weeks of the baby’s birth. The 21st day is considered to be the most auspicious day and hence the grand celebration takes place on this day.

The naming ceremony begins with a puja that seeks the blessings of God for the baby’s health and sustained happiness. Once the elaborate rituals are done, either father or mother whispers the chosen name into the newborn’s ear.

Then the name is announced to the rest of the family members, relatives and friends. The large gathering welcomes the child by calling out loud his or her name as formal invitation to join the extended family.

Everyone showers the baby with all kinds of gifts and valuables.

The naming ceremony takes the form of a grand spectacle in a joint Bengali family where traditional practices and customs are followed without compromises.