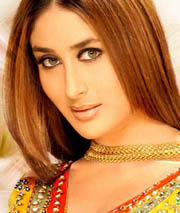 Kareena Kapoor has glamorous look and she is most attractive and successful star in the Bollywood. She  belongs to high profile family and acting talent run in her family.

Kareena is the younger daughter of Randhir Kapoor and Babita who were famous actors of their time.  She has one elder sister Karisma who too gained fame in the field of acting.

Regarding her educational background, Kareena completed schooling from Jamnabai Narsee School in Mumbai but later on shifted to Welham Girl’s Boarding School in Dehradun.

She holds degree in Higher Education with Commerce Stream from Mithibai College, Juhu in Mumbai and then shifted to Harvard where she took admission in Microcomputers and Information Technology.

Kareena Kapoor made her acting first appearance with film ‘Refugee’ but this film did not shaped her acting career. After that she played an important role in Karan Johar’s blockbuster ‘Kabhi Kushi Kabhi Gham’ that gave her applause and business success.

She was also seen in the movie ‘Ashoka’ with SRK in 2001.  Her acting was highly appreciated in these two films and she generated huge fans.

Kareena received her second compliments for her good acting in the film ‘Chameli’ which was released in 2004. In this movie she played a role of a prostitute and got Filmfare Special Performance Award.

Another hit movie of Kareena gave was 'Jab We Met' in which she worked with Shahid Kapoor and her acting was marvellous. Both actors were centre of attraction at that time and media highlighted their close relationships.

Later on Karena became close to famous Bollywood star  Saif Ali Khan and worked together in the movie ‘Omkara’ which was another blockbuster.

She also proved herself as most beautiful and stunning heroine in films such as Don, Heroine, Bodyguard, 3-Idiots and Golmaal-3, Bodyguard etc.

In all these movies, Kareena’s acting was applauded and these films were huge commercial success. Bodyguard earned approximately 82 crore in just five days, making it a gargantuan hit.

In September 2013, her film Satyagrah was released in which she acted as journalist, where her acting was much appreciated. Kareena Kapoor and Saif Ali Khan had affair for many years and finally they tied knot and are the most passionate couples of Bollywood.

After marriage, Kareena’s life has not changed and she continues to follow her acting career.