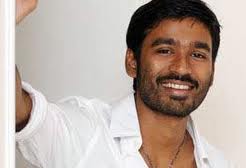 Dhanush is a megastar in Tamil film industry. He is multi-faced personality, actor, lyricist, producer and playback singer.

His brother, Selvaraghavan a popular director forced him into acting career.

Dhanush made his debut in Tamil film industry through ‘Thulluvado Llamai’ which had many stars such as Sherin, Abhinay, Ramesh, Shilpa, Gangeshwari and Ramesh Khann.

In 2007, he acted in Parattai EngiraAzhagu Sundaram which was blockbuster. This film was a remake of a Kannada film.

Dhanush also acted in Bollywood’s highly appraised film Raanjhaana that made him a hero in Hindi film industry. He played the lead role opposite Sonam Kapoor. This film was highly acclaimed by the audience as well as the critics.

In 2011, Dhanush was honoured with SIMA Award for the Best Actor (Tamil) category for ‘Aadukalam’. He won the Vijay Award for being the Entertainer of the year, for ‘Yaaradi Nee Mohini’ in 2008.

Dhanush married Aishwariya in 2004, who is the daughter of superstar, Rajnikanth. They have two sons Linga and Yatra.