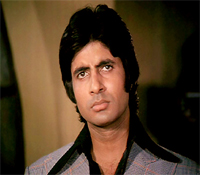 Amitabh Bachchan, a great personality and mega star in Bollywood since four decades. This renowned actor was born in the holy city of Allahabad, UP and son of prominent Hindi poet Dr. HarivanshRaiBachchan and Teji Bachchan.

He took college education in art stream from Nainital's Sherwood School and later he studied in Kirori Mal College in Delhi University.

Before entering to film industry, he was employed as freight broker for the shipping firm, Bird and Co., based in Calcutta. He left the job to choose career in acting.

He tied knot with famous actress Jaya Bhaduri in 1973 as per Bengali tradition. They both have two kids, daughter Shweta and son Abhishek who is also a popular bollywood star.

Amitabh first appeared in film Saat Hindustani in 1969 in which he got national film award but it could not generate much revenue. He was highly praised in the film “Anand” that was a bumper hit at box office. In this movie he appeared in supporting role with the superstar of that time Rajesh Khanna. He won a Filmfare Best Supporting Actor Award for his excellent performance.

After Anand, Amitabh did some good films such as Reshma Aur Shera (1971) and Parwaana (1971) but were unsuccessful at box office. In the era of 70s, Amitabh created his image as "angry young man" and that image still linger on. His first box office hit was Zanjeer directed by by PrakashMehra in which Amitabh had lead role. His other hits were ‘Laawaris’, ‘Coolie’, ‘Naseeb’, ‘Silsila’, ‘Sharabi’ and ‘Jaadugar. All these movies had good theme and people can never forget his superb acting. He played lead role in ‘Shahenshah that shivered the whole country and majority of Indian became fan of Amitabh. 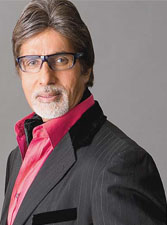 When he was at the peak of acting career, Amitabh entered in the politics and elected member of the Indian Parliament from the year 1984 to 1987.

Bachchan established a company named Amitabh Bachchan Corporation, Ltd. (A.B.C.L.) in 1996. It was India's premier entertainment company in 2000 and this company launched products and services covering the entire range of the India's entertainment industry.

In 2000, Amitabh Bachchan hosted very popular television show Kaun Banega Crorepati and earned applauds for his marvellous performance as a host. This show is still television and Amitabh is hosting with great enthusiasm and energy to entertain the viewers.

Recently he played a lead role in political film Satyagraha produced by Prakash Jha. It is based on the current political situation of India where Bachchan protested against flawed government system of India. His highly motivated acting was appreciated by the Indian viewers.

The speciality of this mega star is that he is continuously working in cinema to give his best and maintaining the popularity.