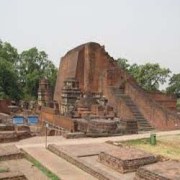 Nalanda UniversityIndia has a rich tradition of learning and education right from the antiquity. The excavation of the sites of Indus valley civilization has brought to our notice the prevalence of written script that suggests people of that time had sufficient knowledge and education must have played a huge part in shaping up their lives.  Unfortunately, the script of that time has not been deciphered, so nothing can be told more about the education system prevalent during the Indus Valley Civilization.

It was around 1500 BC, when the Aryans settled in Gangetic valley more elaborate system of education got evolved. The Hindu religion also evolved at this time and the compilation of the Vedas took place.  Initially the four Vedas were orally passed on from one generation to the other, but later they were written down. It was the knowledge of acoustics that enabled ancient Indians to orally transmit the Vedas from generation to generation. The Rig Veda, the main religious and socio-economic text of Hindus was written between 1300 and 1100 BC.

Institutional form of imparting learning came into existence in the early centuries of the Christian era. The approach to learning was to study logic and epistemology. The study of logic was followed by Hindus, Buddhists and Jains. In the field epistemology, Jains contributed the most.

Education in ancient India centred on three simple processes; Sravana, Manana and Niddhyaasana. Sravana was listening to the truths as they fell from the lips of the teacher. Knowledge was technically called Sruti or what was heard by the ear and not what was seen in writing was the essence of Sarvana.

The second process of knowledge was Manana that implies that the pupil has to think out for himself the meaning of the lessons imparted to him orally by his teacher so that they may be assimilate fully.

The third step was known as Nidhyasana meaning complete comprehension by the pupil of the truth that is taught so that he may live the truth and not merely explain it by words.
In ancient India the objective of knowledge was that it must result in realization of truth. The admission was made by the formal ceremony Upanayana or initiation by which the pupil left the home of his natural parents for that of the preceptor to gain knowledge. In this new home he had a second birth and was called Dvijya or twice-born.

Nyaya schoolsThe institutional form of education was first imparted through the Guru-Sishya system of learning. The training of the students took place at the home of a Brahmin teacher. The relationship between the student and the teacher was most important in shaping up the entire education process. In some texts, the teacher is depicted as the poor ascetic and it is the duty of the student to beg for his teacher.

In ancient India, the aim of education was to develop the pupil's personality, his innate and latent capacities as a process of one's inner growth and self-fulfilment. This view of education evolved its own technique, its rules, methods and practices.

The family functioned as a domestic school, an Asrama or a hermitage. Here, the teacher's constant attention and personal instruction developed the mental faculties of the students.  The first lesson that was taught to the student was the performance of sandhya and also the reciting of gayatri mantra.

Education was treated as a matter of individual concern and not a method of mass production.  The thinking principle or Manana Shakti was reckoned as most important subject of education in ancient India. The training of the mind and the process of thinking were essential for the acquisition of knowledge. Hence the primary focus of education was the mind itself.

There were special institutions for the promotion of advance learning and research in ancient India. These were called as Brahmana-Sangha or Congress of philosophers in the Rig Veda.

In the Brahmana Sangha, academies, called Parisads, held learned discussions in refined Sanskrit to express their highest thoughts. In the Upanishads, there is a reference to the Pancala Parisad in whose proceedings even kings participated.

The codification of Brahmanical philosophy was done under the direction of the master philosopher, Yajnavalkya, after elaborate discussion at the Brahmana-Sangha.
There was equality between the sexes at the Brahmana-Sangha.  The Rig Veda mentions women Rais called Brahmanavadinis participating in Brahmana Sangha. A lady- philosopher named Gargi was a prominent participant in the deliberations that finds special mention, besides men like Uddalaka Arni is also mentioned of taking part in the discussions.

Theses learning were also prompted by discussions at public meetings which were a regular feature of the rural life in ancient India. It was addressed by wandering scholars known as Carakas. These scholars toured the country to deliver public discourses and invited discussion with the local people.

Method of Teaching in Ancient India

The teacher would instruct handful of students seated on ground. At the beginning the main subject studied was to be the Vedas. For many hours daily students would repeat verses after verses of the Vedas till they attain mastery of at least one of them. To ensure correctness of memory, the hymns were taught in more than one way.

Soon the curriculum was expanded and six Vedangas were then taught - the performance of sacrifice, correct pronunciation, knowledge of prosody, etymology, grammar, and the science of calendar were the topics of study.

In the post-Vedic era, teachers often instructed their Brahmin students in the six schools of Philosophy. The writers of Smritis maintain that young women of upper class underwent this kind of training. Princes and other leading Kshatriyas were trained in all the manifold sciences to make them fit for government.  Education was barred for the lower rung of the society and boys learned the trade through their fathers, while girls remain uneducated.

Centres of Learning in Ancient India

There were many places in ancient India that is associated with learning.  Some of the centres of learning turned into towns and prominent among them were places like Varanasi, Taxila from the day of Buddha and Kanchi in the beginning of the Christian era.

Varanasi was famous for its religious teachings. At Varanasi there were about 500 students and a number of teachers. There were also universities at Taxila and Ujjain. They were centres for learning medicine, mathematics and astronomy. In the south Kanchi became an important center of learning. Then there was Vallabhi, Nalanda and Vikramashila.

Taxila was known for its secular studies. Some cities became renowned because of their teachers. Among the famous men connected with Taxila was Panini, the grammarian of the fifth century B.C. It is interesting to note that in Taxila even married people were admitted as students. A Jataka story tells of how a teacher of Taxila treated well the students who paid him money while keeping other waiting.

There were other learned persons like Charaka who was one of the leading authorities of Indian medical sciences.  Kautilya, the Brahmin minister of Chandragupta Maurya was an expert in political science.

The ancient text Smritis maintains that a small number of students use to study under a single teacher; however this was not a rule.  The whole establishment was maintained by charitable people. Ideally, the teacher took no fee, but the students repaid his debt by their service to the teacher.

Buddhist university Among the seats of learning in ancient India, the University at Nalanda stands tall in every aspect. Nalanda University attracted students not only from different parts of India but also from Tibet, China, Korea and Central Asia.

Nalanda University had imposing structures in its sprawling campus. There were eight colleges in the campus each built in different patterns. One of the colleges was built by Sri Vijaya, the king of Sumatra. According to Hiuen-Tsang, one of the colleges had four storeyed high structure.

Every facility existed for studying various kinds of subjects at the Nalanda University. As per Tibetan records; there were three great libraries in the University at Nalanda.

Nalanda University was one of the earliest examples of residential cum-teaching institutions. It housed thousands of monks devoted to learning, philosophy and meditation.  Over 10,000 students including teachers lived and studied at the university. They came from various parts of the world.

Though Nalanda was primarily a Buddhist university its curricula included Hindu scriptures, philosophy and medicine. According to Hiuen-Tsang, since students were expected to enter into dialogue with visiting scholars, logic and exegetics were preeminent subjects. This compulsion of public debate made both teachers and students become familiar with all systems of thought in accurate summary.

The Nalanda University had also succession of brilliant teachers. Dharmapala was a Tamil noble from Kanchi. Janamitra come from another country. Silabhadra, the saintly guru of Hiuen-Tsang, came from Assam.

A great achievement of the University was that it was able to continuously rejuvenate Buddhism in far off countries. Tibetan records mention a succession of learned monks from Nalanda University who visited their country. It is also mentions that Sudhakara Simha went to China and worked there on the translation of Buddhist texts.